MUNICH (Germany) – An astonishing number of Euroleague Women followers have actively supported their favorite female athletes in the 2018-19 Fan Vote to decide the Regular Season awards.

Supporters represented their colors with pride and in numbers too, with several thousand votes cast for the players and coaches who were nominated for the seven different categories.

Most Valuable Player of the Year 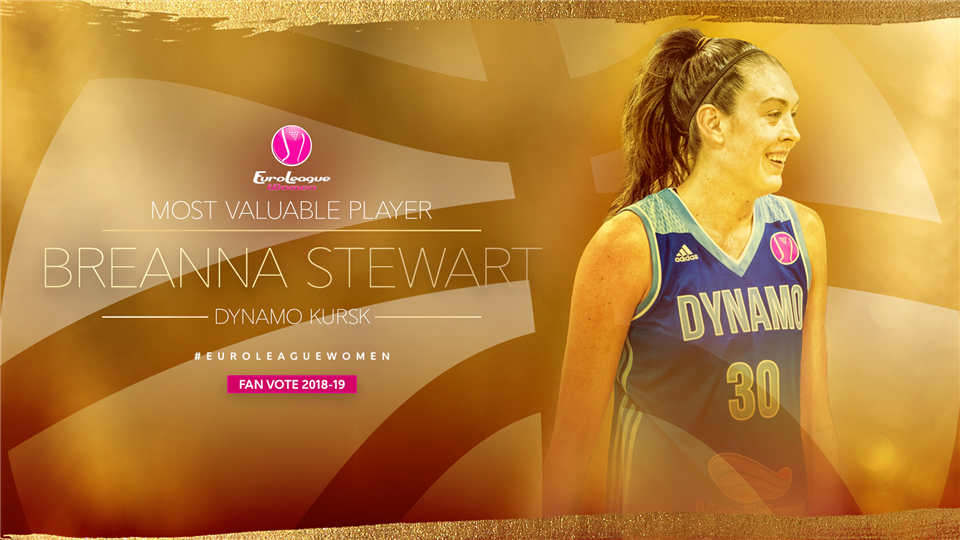 She has already been named Best Frontcourt Player and now Breanna Stewart has been crowned Most Valuable Player of the Regular Season after fans voted for her in their droves to ensure she received the prestigious accolade. This latest gong for Stewart comes after she was WNBA MVP and WNBA Finals MVP last year, as well as landing the MVP award at the FIBA Women’s Basketball World Cup 2018 in Tenerife. It has certainly been worth the wait to see Stewart play her first ever year in EuroLeague Women as she topped the scoring chart with 20.9 points per game, while also harvesting an average of 8.6 boards.

Stewart took the MVP throne with 30.7 percent of the votes; while Marine Johannes of Bourges Basket just missed out on an awards treble after polling 25.9 percent in second place, with Yvonne Turner of Sopron Basket rounding out the MVP podium in third with a creditable 20.6 percent.

Most Entertaining Player of the Year 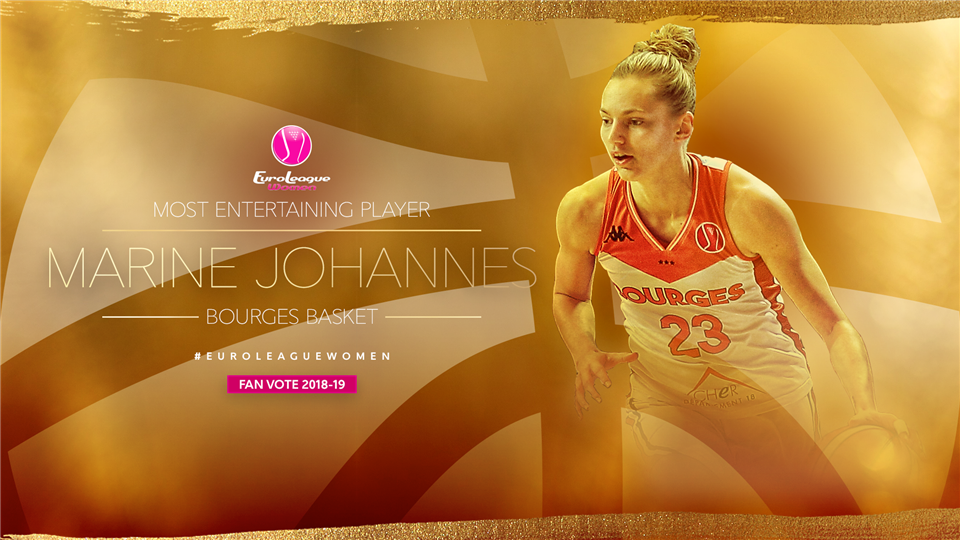 There was a sense of deja-vu in this category after Bourges Basket sensation Marine Johannes edged out Yvonne Turner of Sopron Basket – as she did also in the poll for Best Guard. Johannes has been crowned Most Entertaining Player by the fans after an astonishing number of jaw-dropping plays throughout the campaign, with her season mix needing to be seen to be believed. From scoring buckets from all angles, to serving up the most outrageously brilliant assists for her teammates, Johannes cemented her reputation as one of the most exciting, dynamic and entertaining players in the global game.

Johannes led the way with 37.5 percent of the votes; Turner eased into second place with 29.1 percent, while Breanna Stewart of Dynamo Kursk polled 16.4 percent and was third.

Best Frontcourt Player of the Year 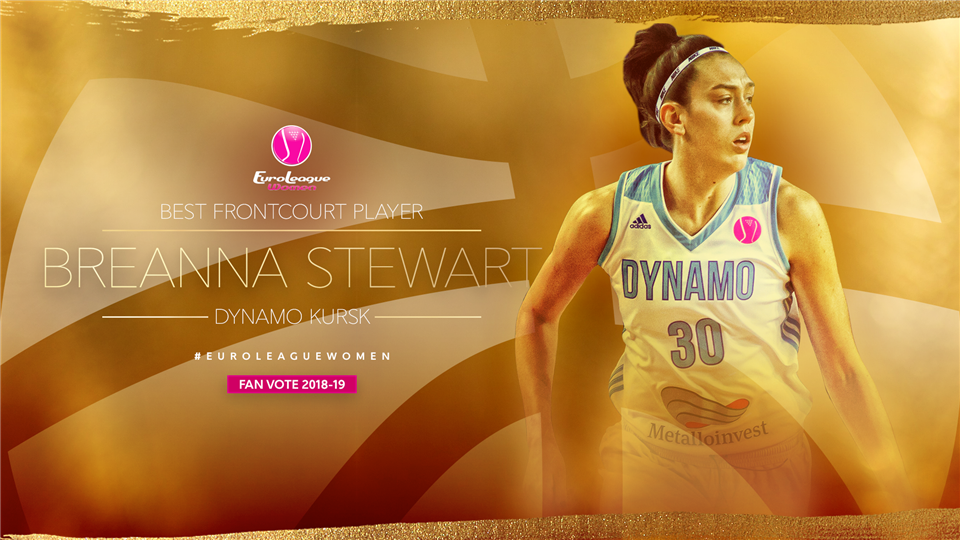 Breanna Stewart has certainly turned heads during her maiden EuroLeague Women campaign and while she still has the Final Four to come and potentially a title, she can already lay claim to being voted the best frontcourt player by fans. She led Dynamo Kursk to their 13-1 Regular Season record and was the leading scorer in the whole competition with 20.4 points per game, also hauling down 8.6 rebounds per outing and coming second in blocks with 1.5 per game.

Stewart was top of the frontcourt class after getting 29.6 percent of the votes; while Candice Dupree of Sopron Basket flew the flag for the veterans after her classy campaign led to her taking 20.9 percent in second place. Sandrine Gruda of Famila Schio was in third place with 13.3 percent.

Best Wing of the Year 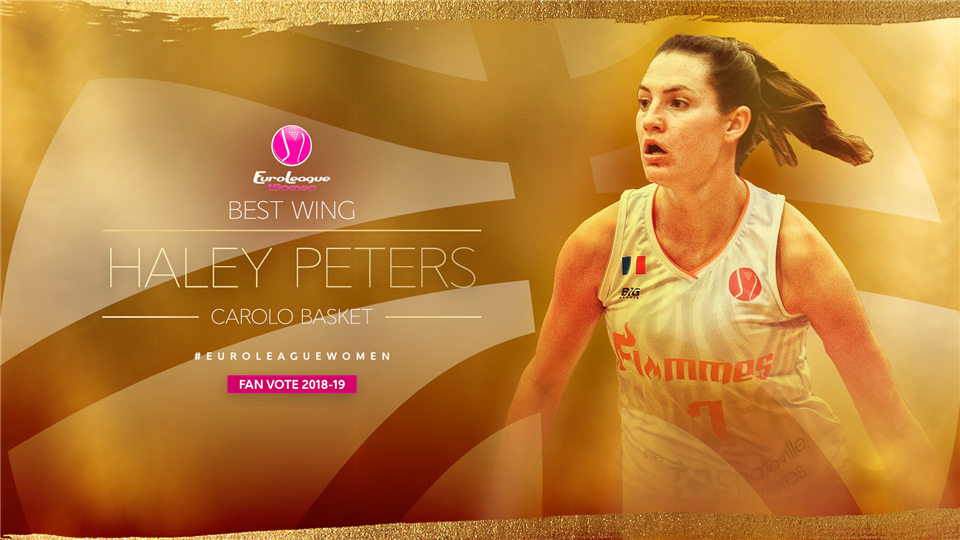 Haley Peters enjoyed stepping out in what was her first ever season in the competition, playing for what was the first Regular Season for French club, Carolo Basket. The versatile rookie was sensational and scoops the award after fans were thrilled by her all-around skill-set, with Peters finishing as one of the leading scorers in the Regular Season with an eye-catching 17.6 points per game.

Peters was way out in front with 35.2 percent of the votes; Serbian ace Aleksandra Crvendakic of Sopron Basket was a popular choice in second with 22.2 percent, while Valeriane Ayayi of ZVVZ USK Praha was recognized for her excellent season with the Czech giants as she landed 15.8 percent of votes in third.

Best Guard of the Year 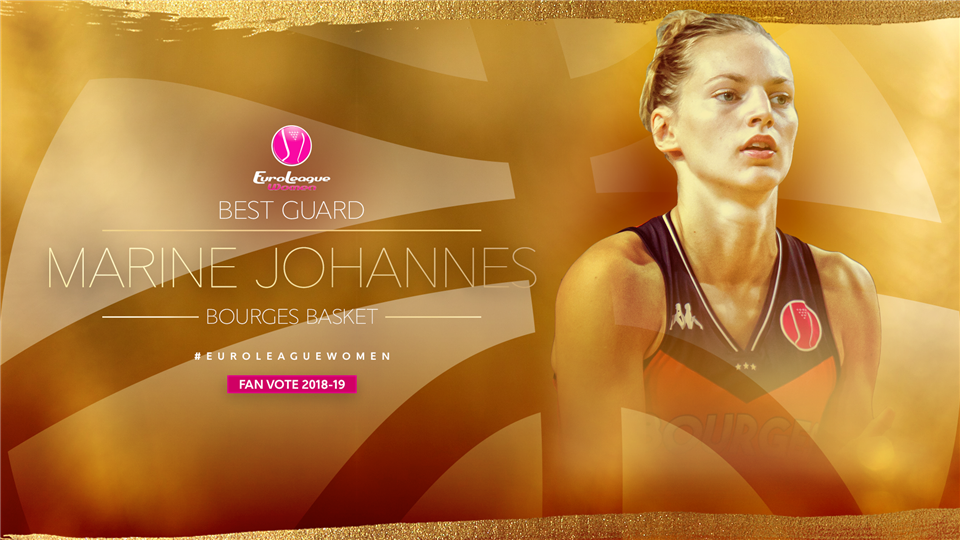 It was an incredibly fierce battle to land the title of the best guard during the Regular Season and in the end, it was Bourges Basket standout Marine Johannes who just pipped Yvonne Turner of Sopron Basket in a two-horse race for the honor.

The French star led her team to the Quarter-Finals and averaged almost 15 points per outing. She was a big hit with fans as she handed out 4.9 assists per game and whether scoring or creating, she was a near ever-present on the top plays compilation each week.

Coach of the Year 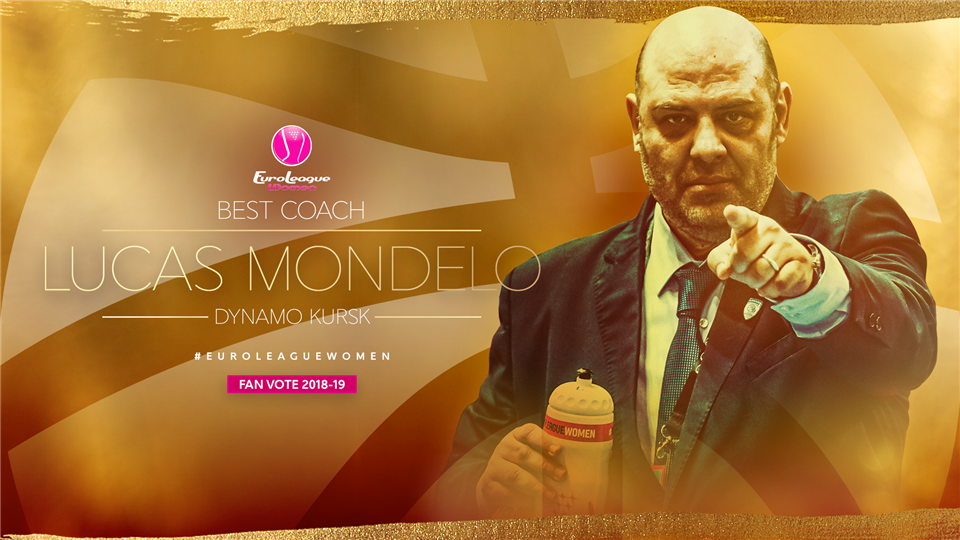 Safely into the Final Four next month for a third successive edition of the event, Dynamo Kursk have leaned heavily on the expertise of playcaller, Lucas Mondelo. The Spaniard masterminded a 13-1 Regular Season record, with Kursk winning an array of tight games, prior to seeing off CCC Polkowice in the Quarter-Finals. That has impressed fans, who have voted him as the Coach of the Year.

Mondelo led the way with 45.1 percent of the votes; his former Kursk Assistant Martins Zibarts of TTT Riga finished second with 26.7 percent, while Roberto Iniguez of Sopron Basket polled 10.7 percent and was third.

Young Player of the Year 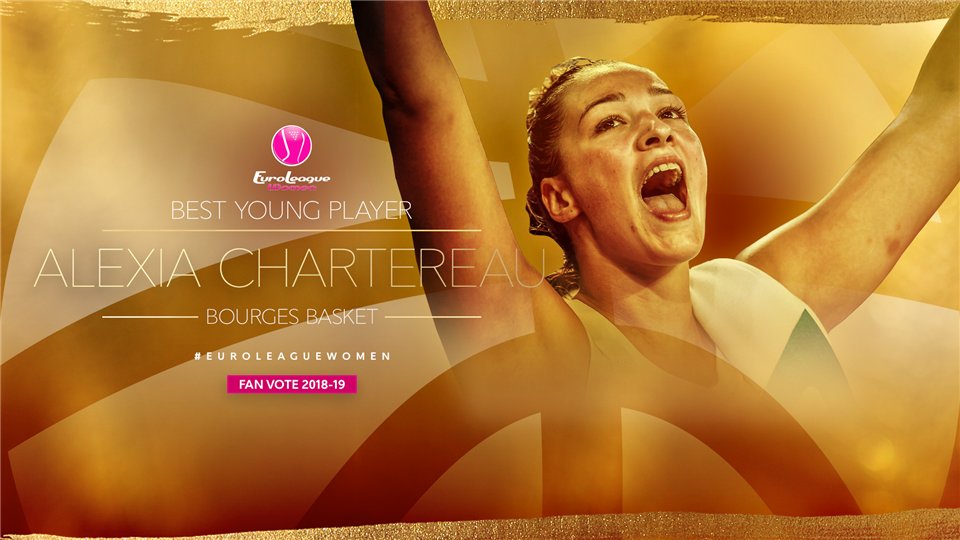 Alexia Chartereau of Bourges Basket came away as the winner of the Young Player of the Year, after continuing to make progress as a major favorite and key performer at Le Prado.

Already an established figure with the French senior team and with the FIBA Women’s EuroBasket 2019 in her sights, the 20-year-old forward impressed fans with her growing influence in the competition. She returned 12.3 points per game and shot almost 50 percent from the floor – as well as harvesting 3.6 boards per game.

Chartereau led the field with 36.3 percent of the votes; Debora Dubei of Sopron Basket finished second with 30.1 percent, while Maria Vadeeva of UMMC received 17.3 percent and was third.