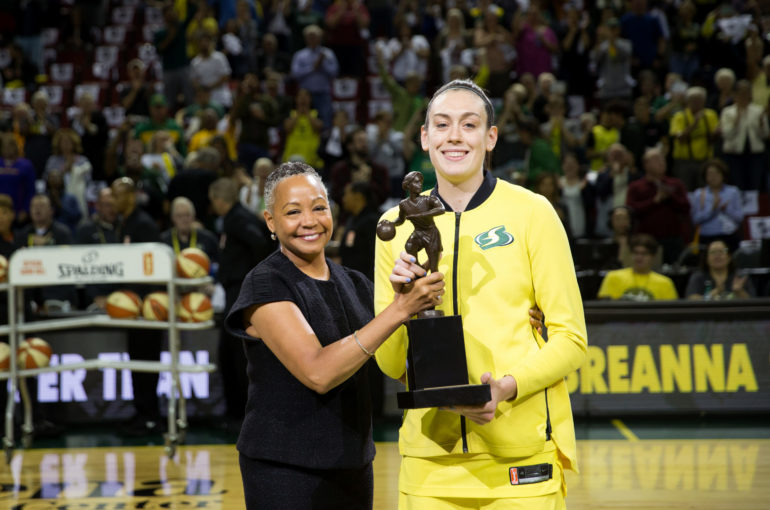 Seattle forward Breanna Stewart had two things on her mind entering this season: get the Storm back to the top of the league standings and be the WNBA’s MVP. She has done both.

Stewart was named MVP on Sunday and will receive her award later in the day as the Storm host Phoenix in a semifinal series opener at KeyArena (5 p.m. ET, ESPN2). The top-seeded Storm are 26-8, their best record since going 28-6 and winning the 2010 WNBA title.

Stewart wins the honor at age 23 (she turns 24 Monday). Another former UConn standout, the Liberty’s Tina Charles, also won the MVP at 23 in 2012 when she was with the Sun. The WNBA’s two youngest MVPs were 22: former Seattle star Lauren Jackson in 2003 and current Sparks forward Candace Parker, the only rookie to win MVP, in 2008.

This season, Stewart has averaged 21.8 points, 8.4 rebounds, 2.5 assists and 1.4 blocks. Her teammate Natasha Howard also was honored Sunday as the league’s most improved player. In her fifth year in the WNBA and first with Seattle, Howard is averaging 13.2 points and 6.4 rebounds, both career highs. And Seattle point guard Sue Bird won the Kim Perrot sportsmanship award for the third time.

Stewart already has an impressive collection of hardware from her collegiate days at UConn, where all four years she won the NCAA title and was named most outstanding player of the Women’s Final Four. She was also named Associated Press National Player of the Year as a sophomore, junior and senior. And she won WNBA Rookie of the Year in 2016 after being the No. 1 pick.

But the WNBA’s MVP honor is especially important to her.

“In this league, I’m playing against however many former national players of the year, and going against the best competition every night,” Stewart said. “And really trying to play my best and show that to everyone.

“We have team goals, and I have individual goals for myself. And being MVP was a goal that I had. I wanted to prepare like this was going to be an MVP-type season. To go out and leave everything on the court.”

That also meant leaving certain things out of her grocery cart. Stewart, who played in China over the winter, said she’s made a concerted effort to improve her fitness with yoga, pilates and eating healthier.

“I’m making sure I’m getting enough calories and the right portions, plus just finding healthy snacks,” she said. “And not having unhealthy snacks in my house. Because if I see them, I’ll eat them.”

Stewart gives a lot of credit to Bird, who at 37 is the oldest player in the WNBA but still a Storm starter. Bird made a strong commitment to fitness and diet in recent years and has worked to make sure younger players know it’s never too early to do that.

“Sue has played a big factor in it for me,” said Stewart, who worked out with teammates Bird and Jewell Loyd after she returned from China. “I got some guidance in what I should be doing.

“One of the things I talked to Sue about was, ‘If you could have started doing all this with your diet at 23, would you?’ And she said, ‘Yeah, definitely.’ That’s all I need to hear. She’s 37, and still remains the best of the best, and continues to be great.”

Stewart said her fitness and her experience after a few years in the league have contributed to the efficiency that’s really stood out this season. Stewart is shooting 52.9 percent from the field, 41.5 from 3-point range. Her effective shooting percentage is 58.9, and her true shooting percentage is 63.3. All those are career highs. She also leads the league in win shares at 7.7.

“I think part of it is being more prepared for the strength and physicality of this league, and then understanding our system,” Stewart said of how she has improved in her third WNBA season. “We had a coaching change, but the way we played kind of remained the same. I know where I’m going to get my best opportunities to score.”

Dan Hughes, a veteran WNBA coach who took over the Storm this season, said, “Her efficiency is way up. It’s her taking the time to say, ‘I can improve in this area and this area.’ Whether it’s here or overseas, she is conscious of adding to her game.”